Rules at a Glance 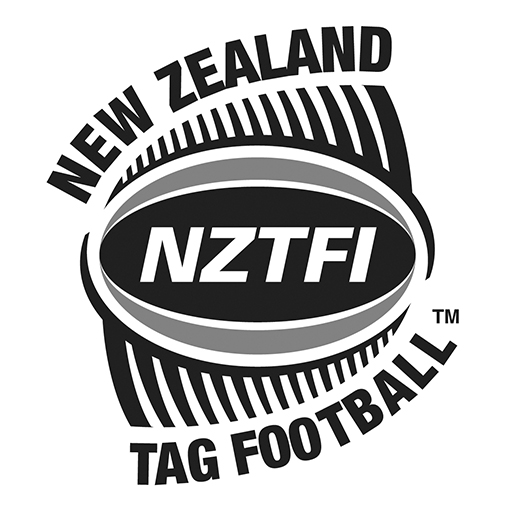 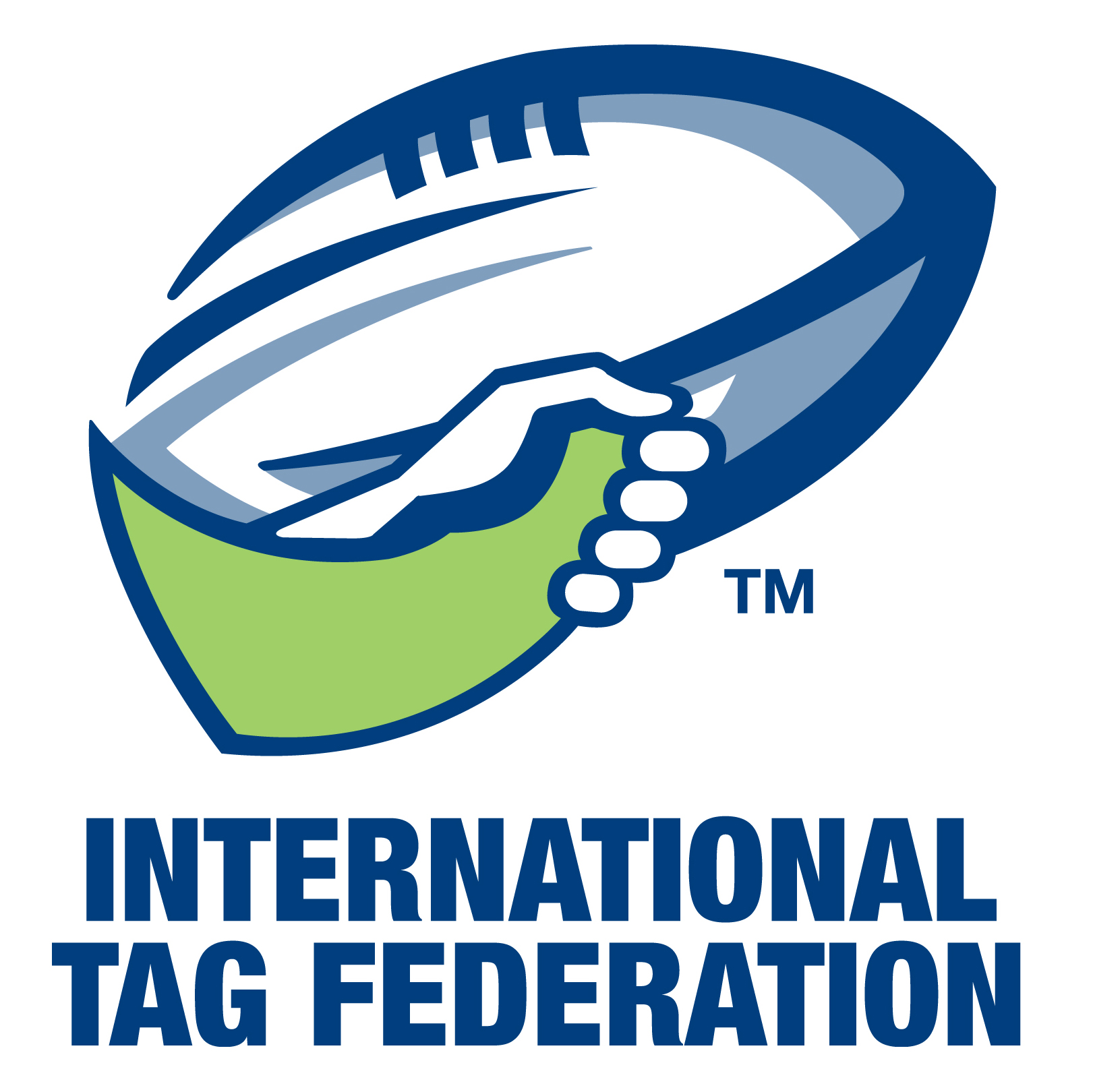 • Tag Football is a minimal contact game
• Maximum of 8 players at any one time.
• Defender must remove one or both tags to stop attacker’s progress. The player then holds up the tag and drops it to the ground, at the point of the tag, marking where the play the ball should occur.
• There is one marker at the play the ball.
• Defending players are onside seven metres from the play the ball.
• Defensive line can move forward only when dummy half touches the ball. Dummy half can run and be tagged with the ball.
• Six tags/plays are allowed to promote ball before changeover.
• An attacker (player in possession of the ball) must stop and play the ball if he is in possession with only one tag on.
• The only persons able to promote the ball with one tag on are the dummy half, and the player taking the tap, providing they do not take more than one step with the ball.
• A knock back is play on. Knock on – advantage rule applies.
• The attacker cannot deliberately bump into a defender. A defender cannot change direction and move into the attacker’s path. Whoever initiates contact will be penalised. The onus is on the attacking player to avoid the defender. ‘Run at Spaces not Faces’
• The ball carrier is not allowed to protect or cover his tag or fend off defenders.
• A try is awarded to the attacking team when they ground the ball on or over the try line.
• A two point try is awarded when the ball is grounded in the 5 metre two point zone in middle of each try-line. The ball cannot be passed once the ball carrier crosses the try-line. Penalty. The ball carrier cannot run back into the field of play after crossing the try-line. Handover at the 10m line.
• Simultaneous tag is play on. The referee judges this pass which is allowed and calls “play on”. Advantage to the attacking team.
• An attacker may pass the ball when he/she is over his/her own defending try-line to a team mate who may run the ball out. If the ball is dropped, a line drop out will be ruled. A player in possession may run behind his/her own defending try-line and back out into the field of play.
• Players can dive to score a try, however, if this player touches the ground with the knees or arms before the try line or slides across the line and a defender is within tagging distance a try is disallowed and a tag is counted.
• At a kick in general play, an attacking player can dive or take possession of the ball after the ball has crossed the plane of the try-line, and before it touches the ground, and then ground the ball for a try. If a defending player touches the ball, after it crosses the plane of the tryline, the ball is immediately dead and play will restart with a tap at the centre of the 10m line.

Misconduct
• Unsportsmanlike conduct covers the behaviour and attitude of players on the field and may result in penalty, sin bin or dismissal.
• New Zealand Tag Football Incorporated has the right and will hand out lengthy penalties for fighting.

Glossary:
Surrender Tags – An attacking player in possession may not become stationary, with or without body movement and surrender tags while in possession of the ball. The ball must be kept in motion at all times.
50/10 Kick – A kick in general play, from before the halfway, which bounces into touch beyond the 10metre line and before the corner marker. Kicking team restarts play 10metres in field on the 10metre line.
Extra Time/Drop Off – To determine the result of a drawn match, at the end of normal time, two (2) players will drop off from each team. Five (5) minutes “golden point” extra time will be played. First team to score wins. However, if a team scores from the kick-off in the first set, the other team has right of reply. If no score in first 5 minutes, one (1) more player will drop off from each team and play will continue until a try is scored. Substitutions may be made during extra time. Mixed composition: no more than three (3) male players on field during extra time.

Attacking Rules:
If the player in possession of the ball, goes to ground or touches the ground, or jumps off both feet, and there is no defender within tagging distance, the referee will call “play on”.

Kicking Rules:
The ball may be kicked in general play, prior to any tag being made, and after any tag.
General Play Kicking Rules:
An attacking player cannot dive on the ball if a kick has been made, unless attempting to score a try. In general play, once the receiving team controls the ball, this team then becomes the attacking team and the same rule applies to that team. This rule applies to all kicking situations, other than attempting to score a try.
If the ball is kicked and crosses the plane of the non-kicking teams tryline and hits the ground, play will restart with a tap kick at the centre of the 10metre line. 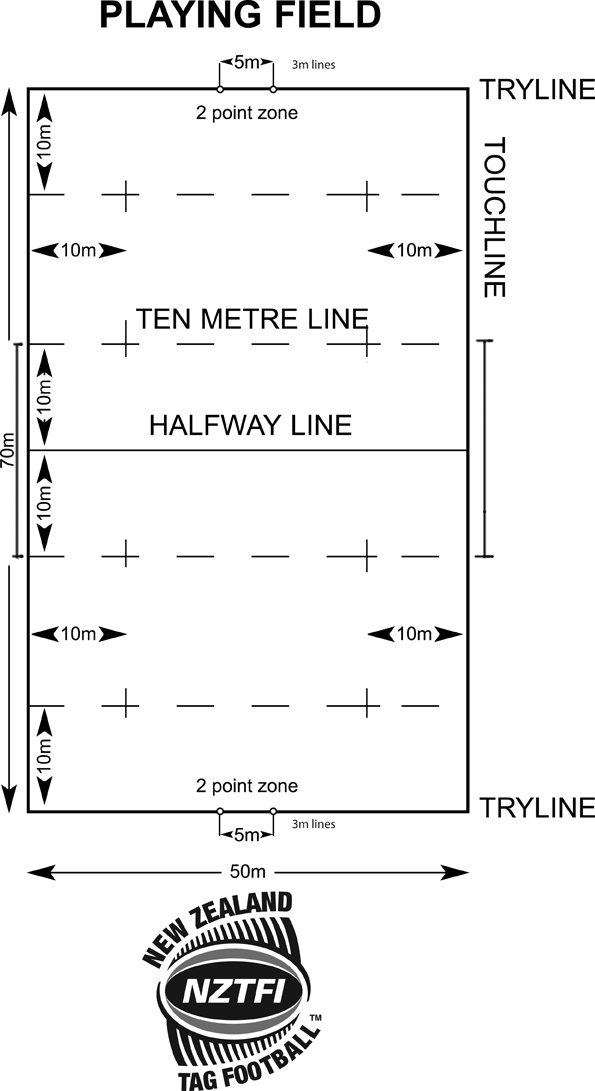